When I told a friend of mine that I was heading to Combermere, he replied he’d never heard of it. Not surprising since it is described in Wikipedia as a village not a town, and upon my first visit to Combermere I determined the description to be quite fitting. The village consists of a couple small restaurants, a convenience store, a post office and a nursery with two hoop houses which appeared to be heated with a wood boiler. No gas station and no Tim Hortons, and in Canada a village has not achieved town status until there’s a Tim Hortons.

While small in stature, Combermere is large in charm with no lack of cottages with abundant water views and clear water lakes. Visibilities in the water of over 10 feet allow one to watch lake life both above and below the surface. The region is hilly and upn reaching the crest travelers are rewarded with the view of another lake. It is a true fisherman and water sports enthusiast paradise. On of the restaurants in town, The Bent Anchor, has a dock that allows access by water and a nice deck, a bit of beach, and a volleyball court. The Bent Anchor is truly enjoyable watering hole which I paddled boarded town one cool late September day. I was grateful of the two respectful boaters who slowed to a troll in to minimize their wake as I paddled up the Madawaska river. The Canadians in these parts smile often, wave at each other and rarely seem to be in a hurry. 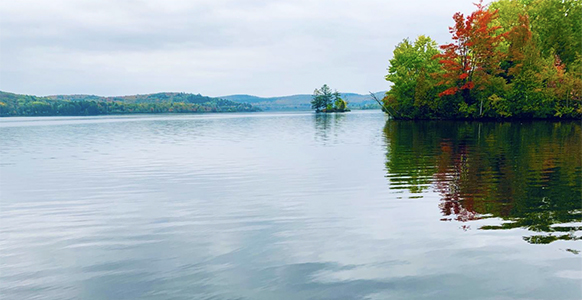 These village is located near the conflux of the Madawaska and York Rivers and the beauty of these waterways have long been to peoples of the first nations. They were the highways of Algonquin, Iroquois, Ojibway and Hurons peoples. The hills and valleys which surround the waterways are heavily forested, predominantly northern hardwoods scattered with pine and other coniferous species. In addition to fishing and boating, watching the leaves change in the fall makes Combermere worth visiting. Mornings in Combermere are rewarded with rose red sunrises and nights with the shrill cry of loons. There songs carrying for miles across quiet waters.

If you are looking for nightlife, Combermere is not you place, unless crashing the occasional cottage party down the lane is your thing. I suspect it would be a viable strategy of meeting new people and that you would be welcomed with a smile and a beer. Located nearby is the town of Barry’s Bay, yes it has a Tim Hortons. The popular Ash Grove restaurant on the outskirts offers great meals, generous serving sizes and good prices. I recommend the fish and chips and they also make great soups. Not far away in Algonquin Provincial Park, the oldest provincial park in Canada, renowned for its hiking opportunities. If you are there in late October competitors from around the world converge on the town of Bristol, just across the river in Quebec, to participate in North America’s largest dry land dog sled race.

If slow place dock life and wandering the woods is your thing than Combermere is for you and I encourage a visit.