I have been spending a lot of time in the ocean over the last month.  When I lived near the ocean in Portland Maine I fell in love with her beauty but I was living on land, caught up in the fast paced life of America and I never really got to know her.  It is beginning to warm as spring time gives way to summer.  The rate of hair algae growth on the pier is starting to increase as the ocean warms and the waters around the island are turning green as the annual phytoplankton bloom occurs.  New species of sea creatures accompany this change.  Different species of fish are becoming visible in the harbor.  Various types of jellyfish who feed on plankton are also showing up in great numbers.  I have observed small fish swimming mouths wide open and they too seem to be enjoying feasting on plankton.  I’ve begun to see a few species of my favorite sea creatures, nudibranchs, grazing on sponges and algae.  Living on the ocean enables a new appreciation for the earth and its seasonal changes.   The diversity on the earth is more than I could have ever imagined. 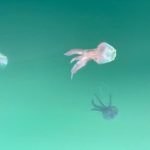 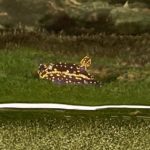 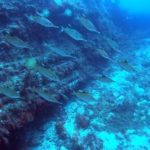 As I think about the changes of the seasons and the diversity of animals and plants in the world, my thoughts drift to thinking about cultural diversity.   It is clear that some of the cultures of the world have had an easier time than others.  The largely peaceful protests in America have brought to light the struggles of African Americans that have encouraged a discussion of racism.  The magnitude of this discussion is something that I haven’t seen in my lifetime.  I fret about the lack of opinions from women on the blog and minorities are even more under-represented.  Perhaps the groups that are most dramatically impacted by climate change are indigenous populations.  Tribal people who desire to live a simple, relatively low impact lifestyle that their ancestors have for millennia.  I have read opinions that drought, deforestation and receding sea ice is making this subsistence living increasingly difficult for indigenous populations.  My first nation friends seem to agree but so far seem reluctant to share stories.   Hechin is the first interview person I have interviewed who is part of and works closely with indigenous communities.  I don’t imagine that subsistence living is an easy life, andI had never really thought about the challenges associated with being a woman in a tribal society.  Hechin’s interview made me think a bit about both and her words follow.

What is the goal of your The Centre For Women And Girls Tengnoupal?

The goal of the Centre For Women And Girls Tengnoupal (CWG) is to improve the humanitarian situations of vulnerable communities in distress who are directly or indirectly affected by the different forms of gender based violence and armed conflicts.  We accomplish this goal through skill building and we focus on teaching organic farming to improve sustainable livelihoods.   We try to enhance protection for victims of gender violence at all levels.  For example, we develop mechanisms for reformation of the tribal customary laws and practices since they can act as a barrier to the growth and development of women and children.  We focus on creating new policies at the state and local level which foster a community responsibility for creating a system that will efficiently and effectively protect women and children from all forms of violence and exploitations.  Our goal is to empower vulnerable communities so that all members can live life with fullest potentials as equal human beings and enjoy living in society with dignity. 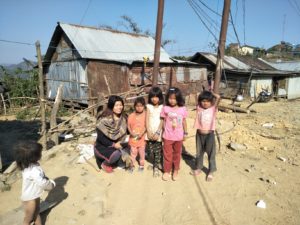 What is your role at your The Centre For Women And Girls Tengnoupal?

I have served as the organisation’s secretary since its inception in 2006 and have multiple responsibilities.   They include personnel management, administration, resource mobilization, and writing project proposals.  I also focus on networking and alliance building with government and non government organizations. I ensure that we are in compliance with mandatory legal rules and that we adhere to regulations required of our organisation. 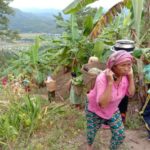 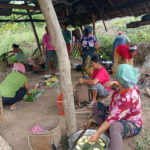 Why is your organization headquartered in India?

Our organisation is headquartered in a rural village in Tengnoupal district.  This district recently bifurcated from Chandel district, Manipur. Tengnoupal is located within Indiaand is one of the 16 districts of Manipur bordering India to Myanmar.  The main reason why we are based in this rural village is because there is much more need in rural communities.  We are working mainly with tribal communities and focus on education, empowerment and community development.  Our goal is to build a more sustainable and peaceful society.

Can you provide any examples of how your organization has positively impacted communities?

Yes there are many areas where our organisation has positively impacted communities.  Over the last 10 years one focus of the organization has been to educate numerous rural communities about their rights and entitlements. These communities have not only become aware of these rights but have also started their own lobby and advocacy groups. People are better organised and they have started various movements.  One effort that has been particularly satisfying is “the right to food” campaign. CWG has been actively taking part in various campaigns helping community leaders interact with various local Government Agencies and NGOs since its inception. 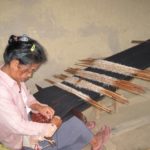 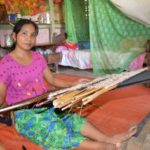 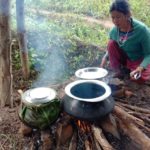 Is there a way people can contribute to your organization?

We view the people within our community as our organization’s most valuable assets.   Their sustained efforts continue to support the Centre For Women And Girls Tengnoupal.  Because these human resources work within the community where they live, the communities and their leaders accept our presence and are open to our efforts.  This is particularly important when trying to create positive change in tribal cultures who can be skeptical of outside influence.

A portion of the funding for CWG comes from donors around the world.  If you are interested in contributing to our efforts to help empower women on girls in Tengnoupal you can learn more about our organization at our website (https://cwg-manipur.org/). 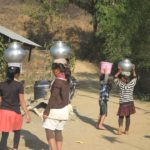 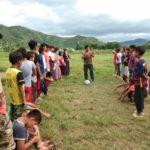 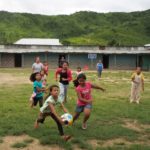 Have you ever been to India?  If so avoid the big cities like Delhi or Mumbai.  They are my least favourite part of living in India.   Rural villages like those in Manipur are my favourite part of living in India and will give you a chance to really know the people of India.  I have seen very rapid changes happening in terms of infrastructure development in my state. Massive destruction of forests, falling of trees and exploitation of mountains in the name of highway construction and other purposes.   We are trying to create public awareness of the climate crisis through adolescent groups formed by our organisation at different villages. We recently started a movement “Fridaysforfuture” campaign.  Youth are the creators of change so we have focused our efforts on educating the young.

Talking with Hechin makes me realize just how little I know about the world and the people who live in it.  I have visited places where the average person lives in developing nations in Latin America, wandered some first nation reservations in America and been to some remote villages in Egypt.  In general I feel the people in these places are more open and giving than their counterparts in highly industrialized nations.  As I think about what I have seen I know that in a lifetime there is not enough time to understand the day to day challenges that the peoples of the world experience.   I’m certain that visiting rural Manipur would be quite different than any of the locations I have experienced in the world.   However I am equally certain that the goals and aspirations of the people there are the same as everywhere, to “live life with fullest potentials as equal human beings and enjoy living in society with dignity”.