Richard and Tracy, Barrow in Furness

Interview conducted aboard the s/v Zephyr

I was unaware one could bimble or rather better yet go bimbling through and enchanted forest until I met Richard and Tracy.  They are a couple who are completing their Atlantic Circuit aboard the Zephyr and a part of the formidable gang of Moodys.  I like to think of myself as somebody who is awestruck on a daily basis by nature’s beauty, but feel that Tracy appreciates the earth’s magic moments even more so than I. I’ve really been enjoying following her Facebook blog, Zephyr’s voyage, and listening to her stories.  She speaks with a Cumbrian accent and I feel like I’m listening to my school teacher read fairy tales.  Perhaps part of that is because the conversations when hiking in the woods have been about gruffalos and hobbit forests.   I enjoy listening to both her and Richard speak almost as much as I do learning from them.  They are from Barrow and Furness and I would describe them as practical, sensible, disciplined, hard- working folks.  It is almost like they are from another time, perhaps a better time, an ancient world that seems to have been lost.

I’ve been learning a lot from watching Richard prepare to set sail.  As I mentioned they are an old school couple. 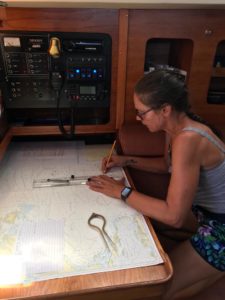 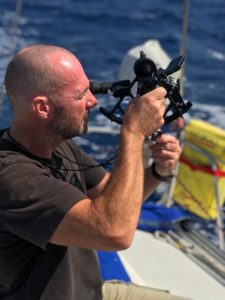 Richard maintains a proper paper log book with entries every 6 or so hours and uses a sextant to practice and perfect his celestial navigation skills.During their voyage their ability to determine their location has become increasingly accurate and they are now consistently within 3 nautical miles of the GPS location.  They track their progress on paper charts and carry out daily rigging checks. This is both to keep them working as a team at sea and the celestial navigation acts as a backup navigational system.  They seem to have a divide and conquer approach to sailing, each focusing on their respective strengths.  There is no one way to do things on a boat but aboard the Zephyr they seem to have found a great balance.  Their words follow.

What is your favorite part of living aboard the Zephyr?

Your home is the same on the inside but the scenery around it changes.  It is like having a different garden every 2 weeks.  There is a simplicity to living in a boat.   We love outdoor activities.  Exploring islands by bike and sailing is everything we like to do.  The wildlife, the sea life, the geography, the birds, the flowers and learning from the earth is what we love.   We have not regretted stepping away from the rat race.  Sailing lets you have time to look around and we like to explore a place thoroughly and get to know it properly. 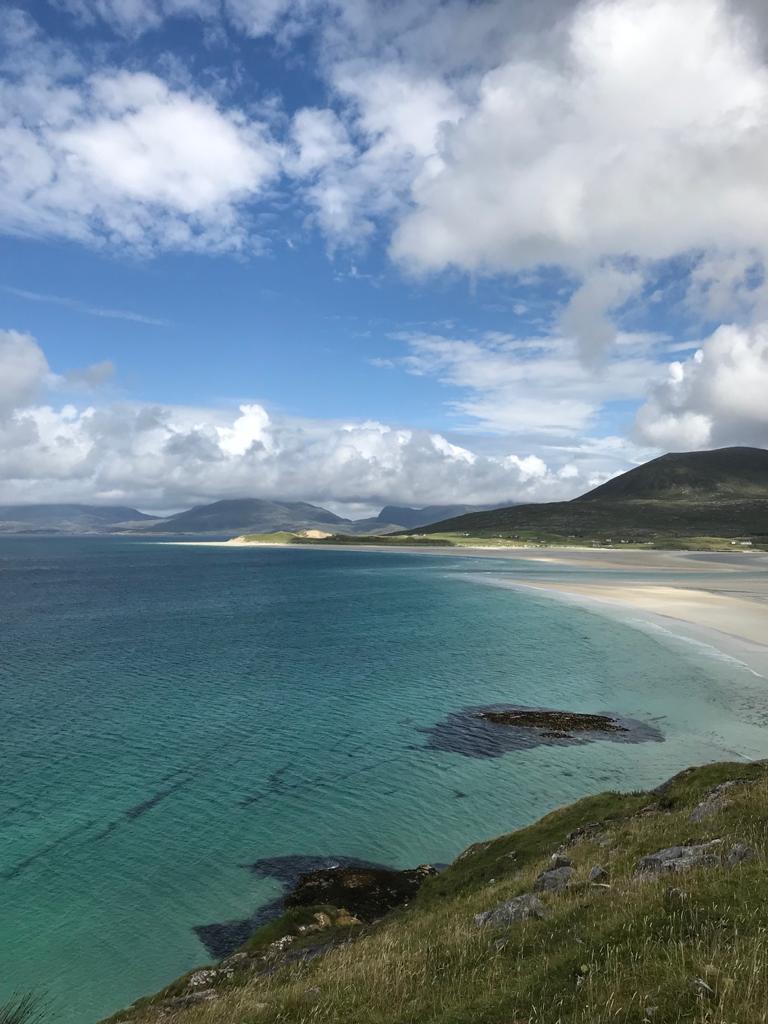 What is your least favorite part of living on a boat?

Boats lack aspects of comfort.  You do not sit in a recliner, you sit in a bench seat.  We’ve done what we can to improve this.  When we first were aboard the mattress was so thin you could almost see through it so we bought a proper mattress and cut it to size with a knife.   We had sailed a lot around the west coast of the UK and especially western Scotland.  The anchorages are well protected and we feel it is one of the best places in the world to explore by sailboat.  We were not used to the ocean swell and rolling around in the anchorage took a lot of getting used to. We also had a hard time with the crowds of Atlantic Europe and the caribbean.  It is nice to meet people but too many people detracts from the natural beauty.  Those places are beautiful but they are victims of their own success. For us, St, Vincent and the Grenadines were this way, spoiled by too many people.. 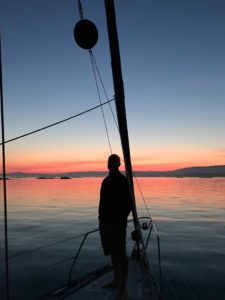 We live in one of the rainiest parts of England.  In recent years there has been a lot more rain, and year after year precipitation records were being set.  Bridges that have been there since Adam have been washed out and towns have started painting high water marks on old buildings.  All of the highest water marks are from recent years.  Where we live there are a lot of windmills appearing on the horizon and it is one of the biggest wind farms in the world.  You have to concentrate to sail through them and they create huge wind shadows.  We like the idea of clean energy but they dont always turn and they burn a lot of diesel running boats to service them and while we support green energy initiatives, we are skeptical of how green they actually are.  Sometimes we wonder if they are simply ways to achieve a target government metric.  Maybe the most surprising aspect of these massive wind farms is that fishing trawlers can’t navigate between them and the bases create habitat for fish life.

The infrastructure that is damaged by flooding is expensive for communities to repair.  Newly designed bridges are always as aesthetically pleasing as the older bridges as well.  Flooding makes life harder on farmers and has a negative impact on tourism as well.

We always try to buy things without plastic packaging and we both cycle to work and back.  On the boat we also have a very low carbon footprint.  We are reluctant to turn on the engine and ideally just use it to get in and out of port.   We try to choose when we sail so that we keep use of the motor to a minimum reasonably practicable.  For example we could fill up the diesel cans and sail home today but we are waiting for a weather window so that we don’t have to use the engine.

We like that our hobbies are low carbon.  Biking, walking, sailing.  We think about food miles, try to buy local and purchase ethically sourced foods whenever possible.  There is a shop called Cut the Wrap where we pay a premium to have bottles and containers refilled to eliminate the need for single use containers.  We bring bags to the supermarket to try and reuse packing for other purposes.  We realize that our impact might not be great and when we see farmers wrapping hay and covering fields in plastics weed barrier it is disheartening.  We find it interesting that fishermen and farmers seem to use a lot of disposable plastics and they may be the group that plastic pollution impacts most by it in the long term.   We are not huge consumers.  We  like to have the right stuff for our hobbies but tend to buy what is sufficient and we don’t buy things we don’t need.

Population expansion really worries me.  They call England the green and pleasant land but then say urbanization equivalent to 7 cities the size of Birmingham will be added in the next 20 years.  A lot of people voted for brexit to control immigration within our own borders.  If we don’t do anything to control population growth England is going to be the land of concrete and tarmac.  How are you going to feed all the people of the world when it reaches 10 million.  Will all food be from GMOs?  Much of the problem we are seeing today seems to stem from population expansion on a global scale.  Man is getting too clever for its own good.  There are now vaccines to control diseases that used to control the population.  Now you don’t have to be fit to survive.

Perhaps a part of the problem is the structure of our political system.  Politicians have 4 years terms and they want to sell policies based on this short time span.  People want something in the pocket now.  There is no incentive to look towards the future in this political system.  We will return back home in about 2 weeks after a year at sea.  We will miss the slow pace of life and the time to live life by its natural rhythm.   When you are at home you work all week and try to cram the activities you enjoy into your weekend.  It leaves no time to wind down, relax and to really enjoy life.

I am a firm believer that life is about learning new things and in the few weeks I have spent interacting with Richard and Tracy I certainly have learned a lot.  I will always be a bit more weary walking in dark forests because of the danger of Gruffalos, but this new found risk will be more than offset from the knowledge Richard shared about sailing and pre sailing checklists.  I’ve always felt that I’ve learned a lot more from talking to people and watching what they do than from reading books.  Seeing Richards pre oyage inspection process will leave a lasting impression and I’ve made a few checklists and voyage planning documents. 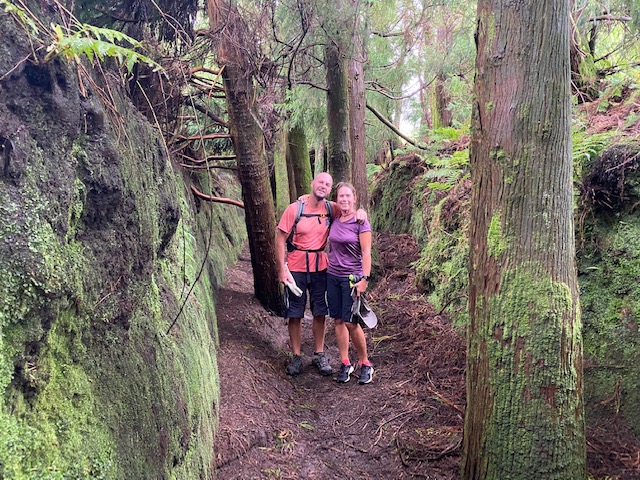 Sadly yesterday was my final hike with the crew of Zephyr here on Terceira island.  It was a rather short bimble along the passagem das bestas where Tracy with her nature loving eyes spotted the native Azorean heather.   It was not lost on Richard and once again he shared a bit of sailing knowledge.  When sailing south from Scotland it is considered good luck to have a bit of heather on your bowsprite when passing Ardnamurchan point.   The isles,and coastline of Scotland certainly sounds like a mystical place to sail and I hope to have the chance.

As I reflect upon the last few weeks and my interaction with Richard and Tracy I think about what I have learned from them.  As sad as it is to see them go, the coming and going of ships and their crews is part of sailing and an important lesson.  Celebrating new friendships is also important and we had dinner aboard the R Heritage Too with Thom and the Gand of Moodys.  Chris was full of answers to questions that bothered us so.  Azores means hawk, and the goshawk is on the Azorean flag.  Chris kept seeing buzzards and apparently there historically was some confusion about what type of bird it really was and the goshawk ended up on the flag.  We also wondered how vegetation ends up on remote island.  Chris again had researched the answer.  Seeds are carried in feces and feather of birds.  Vegetation is also blown to islands on rafts of flotsam.  Interestingly, vegetation that requires specialized insect pollinators is much more rare on islands as both the pollinator insect and plant would have to simultaneously.

Learning new things to me is certainly one of the best parts of life.  I can not know when or if I’ll see the people again but I have thoroughly enjoed the time and hope it will be.  We’ve exchanged information and I’ll be able to track their progress sailing to England.  What I do know is that when people interact there must be a give and take.  There is a same need for balance when people interact with nature.  I am also certain that Tracy and Richard seem to have found this balance aboard the Zephyr and in life in the way they carefully consume.

Richard and Tracy are a sailing couple that will have many great stories to share in the future and I hope they’ll avoid being scarred by the Gruffalo and I hope that I will meet them someplace in the world when they write the story that will be Zephyr’s voyage volume 2.