The harbor here in Praia da Vitoria has become a dynamic place over the last several weeks.  Sailing boats have been coming and going for the month of July as covid lockdowns have been eased.  Sailors (and people travelling by plane) arriving from abroad are required to take a Covid-19 test.  Within 24 hours your testing is completed and if you are negative you are free to travel around the island and have access to the rest of the Azores.  Sailors who have been at sea for more than 30 days are exempt from testing.   The Azores has long been a stopping point for sailors on their way from one continent to the next but this season most cruisers seem to be heading home to weather the storm that is Covid-19 in their home ports. 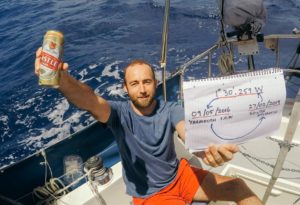 I have often wondered what it would be like to sail around the world.  Thom is a sailor heading home after 4 years of circumnavigating the globe solo in a relatively small sailboat.  His trek aboard the 28 foot Vancouver 28 named Fathom is summarized here (Fathom).  He is onboard one of 3 sailboats heading back to the UK.  I’ll be interviewing each of them over the next few days.   Like most cruisers, he is a friendly low key happy person who seems eager to share a meal and stories.  Thom spends much of his time catching up on his blog posts after crossing the Atlantic.  One sad story he shared was that a boat sank after hitting a whale only 40 miles from the Azores.  Fortunately the crew were rescued but there are certainly a number of risks I never imagined involved in sailing.  Thom’s hails from the Isle of Wight and his words follow.

What is your favorite part of circumnavigating the globe solo?

I believe my favorite part is the freedom to travel on a relaxed schedule.  If you get someplace you really like you can stay there and explore it for as long as the weather allows.  My three favorite places were French Polynesia, Tonga and Madagascar.  In each of these places I stayed much longer than I intended. 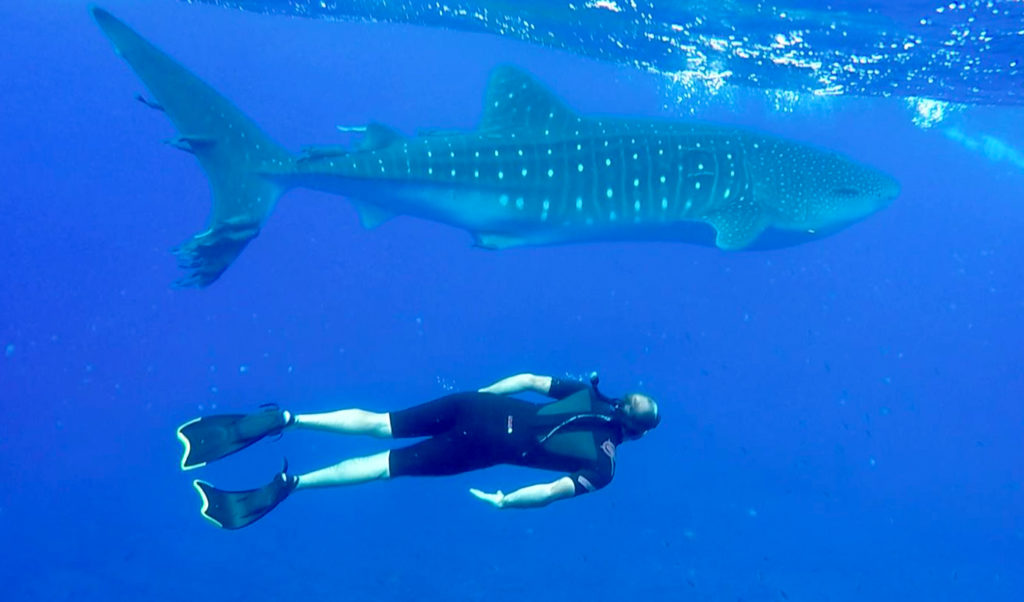 Madagascar was a last minute decision and I ended up spending 6 weeks based on a recommendation from a South African sailor.  By stopping there it also helps you avoid the long passage and likely bad weather on the direct route to South Africa from Reunion or Mauritius.   Madagascar is unspoiled, there is an abundance of sea life, great fishing, and even whale sharks. It is a bit off the beaten path and attracts adventurous long distance cruisers and I very much enjoyed the camaraderie.  Culturally Madagascar is quite different from much of the world.  The locals wanted to trade for things like fishing hooks for lobsters and were less interested in currency.  I enjoyed the old school bartering and trading.  In the villages they live a very simple life and it was humbling to see.  They were very poor, but had everything they needed and were happy.

What is your least favorite part of solo circumnavigation?

Washing up all the time!   Having to put on clean clothes when others are around or wash out the coffee cups, Thom jokes.  More seriously though, the worst part of the trip was avoiding a storm off the coast of Australia.  After 3 days of fighting the bad weather and being blown off course I arrived at a different port than I had requested with the Aussie Border Force.   Upon arrival the boat was searched twice by armed officers with dogs.  They poked camera probes in lockers, unscrewed the floor and even took my iphone and downloaded all the images.  It did diminish the joy of making a safe landfall after a storm. 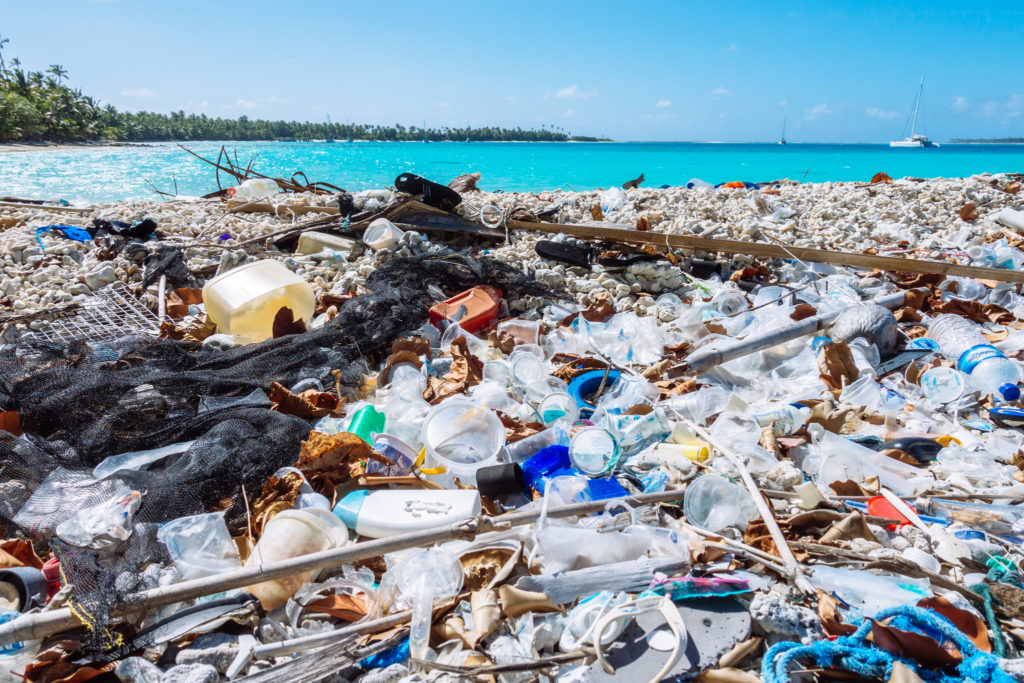 There was a lot of coral bleaching.  It was fairly common to see in the south pacific but it was. especially apparent on the great barrier reef.  There were vast stretches of white, dead coral   I also started noticing plastics randomly floating here and there.   A terrible memory was Cocos Keeling in the Indian ocean.  I saw plastic everywhere on these remote atolls and there was plastic piled up on the windward side of the islands up to 5 feet high.  It isn’t the locals either, they have excellent recycling programs.  It drifts on the ocean currents from various parts of the world but in this case, particularly from SE Asia. They are remote and pristine lagoons but the view is spoiled by all the litter and it was a big shock to see.

Both coral bleaching and pollution will have a dramatic impact on tourism.  Nobody is going to visit a dead coral reef..  Maybe less tourism is a good thing.  As far as plastic is concerned,    the locals clean up plastic and sort in an attempt to recycle the plastics but they are having more difficulty keeping up.  They are being significantly impacted by forces outside their regional control.  The lagoon are so beautiful but littered with plastic waste

I’m trying to raise awareness by writing about my experience.  Education is the key and I just wrote an article for a yachting magazine about Madagascar that I’m excited about having published.  I was surprised at the number of comments about my plastic pollution posts on my blog site. Many people back home in the UK had no idea the situation was so bad. I am also working on a book about my 4 years at sea. Sailing is a very low carbon footprint way to travel.  I rarely turn on the engine, tow a hydro generator and have solar panels. If you eat like the locals it is the most affordable, and I enjoyed eating local, seasonal produce from markets.  The selection is not always great but it really isn’t a problem as each place has different food.  All have fish.  Veggies are quite hard to come by in some locations but almost all tropical locations had some sort of fruit. 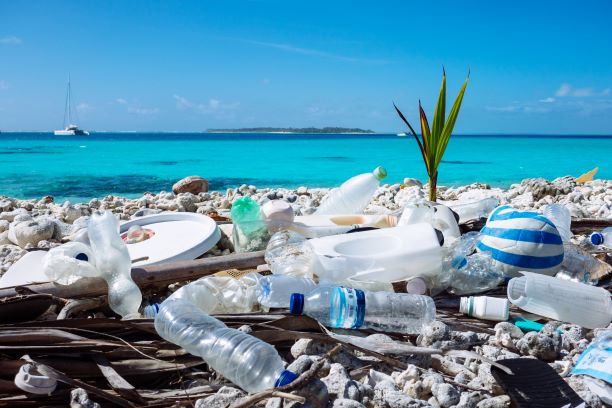 Many people I talk to about my voyage assume sailing around the world solo is very lonely. But actually the time alone at sea is a tiny fraction of the time. I actually love the contrast between the solitude of ocean passages and the social life in anchorages and port. In fact, being able to share the adventures and experiences with like minded others has been the best part. I have made so many incredible friends along the way. The hard bit is always having to say goodbye as we head off in different directions. 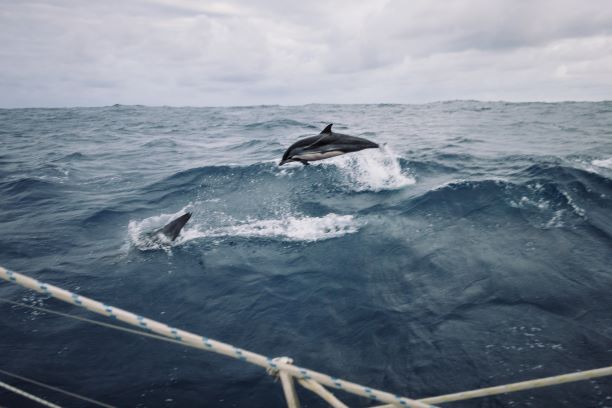 Once again in an interview the topic of plastic pollution became the center of the story.  You see it in the middle of the Atlantic on the Azores Islands as well.  Styrofoam particles collect at the waterline of the boat.  It is difficult not to notice the contrast of rainbow colored flecks of plastic as you walk along the grey sand beaches of the Azores.  I’ve been hiking down steep cliffs to find remote places to fish for dinner.  When possible I haul plastic out but climbing back up the cliff with loads of plastic would be too great of a task.I’ve made a couple of effigies of potential useful things out of beach litter in hopes some fisherman will see the buoys and fishing equipment and repurpose them.  They are scare crows of sorts but I fear too few people will ever see them to live in fear of the consequences of plastic use. 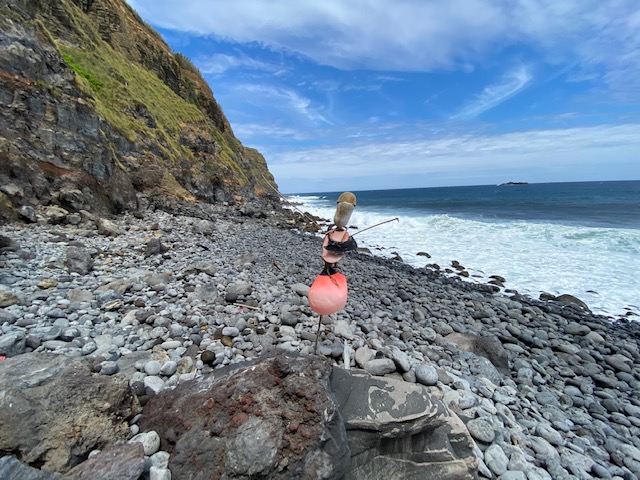 I am both a chemist and a realist and I do feel plastic has good uses.  It is an inert material that is ideal for many medical implants.  It is lightweight and not prone to oxidative decay like aluminum and steel.  The boat I often think of as my renewable energy powered home certainly has an abundance of plastic in the hull.  However, single use plastic for bags and packaging is simply a bad idea.  Eliminating the ability of corporations to use this seems and avoiding them as consumers seems like a good first step in the solvable problem of plastic pollution.  While this approach may make us feel good much more than this is needed to solve the plastic pollution crisis. Superior methods to sort and repurpose plastics are required.  Perhaps a ban on long shelf life plastics will be necessary but I feel this is unlikely unless it impacts a great portion of the world on a daily basis.

As I mentioned I do feel the problem is solvable, but it will take an effort from all of us and it is clear that as a society we are not ready.   The face masks many of us have seen in parking lots are already washing up on beaches.  While I remain optimistic that covid-19 will make us rethink the way we live as a global population, I am beginning to hear stories of isolationism and finger pointing from all corners of the earth.  It always seems to be easiest to make the world’s problems the fault of someone else.  We are all in this together and together as a species we must act as one.