Who is Matthew Ryle and why does a person who grew up in the dry landlocked state of Colorado yearn to become a student of the sea? Both are questions that bother me so. It seems to have started with summer swim team, 8 an unders, at Elks club in Boulder, Colorado. In my teens I taught swimming lessons and was a lifeguard at the local swimming pools in Longmont. Aquariums have been a part of my life since I was a young man. African cichlids were first followed by saltwater fish tanks. I tend to be a bit nomadic in my hobbies but aquariums are one hobby I keep coming back to. I’ve had a small coral propagation business, raised seahorse, and even raised cuttlefish from eggs. The latter two endeavors involved growing phytoplankton to raise zooplankton or days spent flipping rocks on beaches or collecting them with nets to provide them with food. It is fair to say that I am a water person. 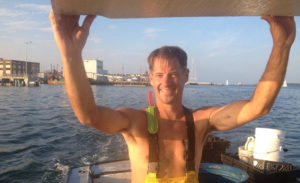 I always knew I would be a scientist. I dreamed of marine biology but Fort Lewis College (FLC), the small liberal arts school I attended as an undergraduate did not offer that degree. I started with Biology but the dynamic chemistry professors at FLC convinced me that chemistry was a better career path. That I would become rich, win the nobel prize and be chased by sapio-sexual woman my entire life. None of that really happened by I am forever grateful for the time they spent training me and they convinced a kid would earned a “D” in high school chemistry that chemistry is way cool and that I should pursue to graduate school. I earned a PhD in Biochemistry at Utah state studying Nitrogenase. I am also grateful to Lance Seefeldt, my mentor for his interesting research project and patience teaching me to write. These writing lessons continued in my post-doctoral work at Michigan State under the guidance of Bob Hausigner. Bob was the ultimate gentleman scholar. He would ride his bike to work and then home for lunch with his wife each day. I never saw him miss a lunch date in the 4 years that I worked with him. We did some great science together and I learned much about priorities in life.

During this time I developed three other hobbies that have remained with me through life. Gardening, home remodelling, and mushroom picking. Gardening all started with my mother. I was forced to pull weeds, harvest veggies or pick cherries before I could go out and play. It seemed like torture at the time but evolved into an activity where I found peace after stressful days in the corporate world. Remodelling houses and building things in general is something that gives me great satisfaction. Writing a dissertation is a seemingly endless slog which was made much more bearable by pounding nails at the end of each day. Some days it would be several pages others a paragraph or two, but roofing, sheathing or installing drain pipes with the oversight of Brandon Bell showed me that I could learn the trades. Today I get more satisfaction from another tradesman admiring my work that I ever did writing publication or winning a productivity award at work. It is just more tangible. I would strongly encourage anybody interested to go into the trades.

Mushroom picking is a hobby I have long loved, and it deserves a paragraph of its own. It is the activity that has taught me the most about the world. Morels is the species I am most familiar with but I enjoy finding chanterelles and boletes as well. I never delved too far into the expert level gilled mushrooms. What I like most about mushroom picking is wandering the woods. I come nose to nose with adult deer, seen numerous fawn, at least 20 black bear, lawns of trillium that look like it snowed, and large colonies of slipper orchids. Like many living things mushrooms live in symbiosis with other species. Each type of mushroom has its favorite tree. Watching the forest change over 20 years has reinforced how important every species is to the health of the ecosystem. I am not against logging but it takes a long time for a forest to recover. Even 20 years after a cut the forest floor is not the same. Even more sad has been watching the ash trees die from the invasive Emerald Ash borer. The borer is a consequence of globalisation and I walked miles upon miles of forest where all the Ash are dead standing. Not a mushroom to be found. Moist lawns of trillium and ramp which once covered the forest floor replaced by dry ground of grasses, a consequence of more sunlight reaching the ground. Watching the deterioration of our beautiful hardwood forest of northern Michigan has been among the saddest things I have seen in my lifetime.

I enjoy scuba diving and prefer reefs over wrecks. I’ve seen bleached reefs off the coast of Australia, also very sad, but I have no first hand experience with the rate of change. The lack of fish is striking when compared to a reef with live corals. It seems very similar to the lack of birds in Colorado’s pine beetle killed forest. Miles of dead standing trees, relatively absent of life. I have seen with my own eyes evidence of animal and plant population decline. The natural world seems to be changing in front of my eyes and I believe that we are at the beginning of the next great extinction. These two events seem to be linked to climate change. 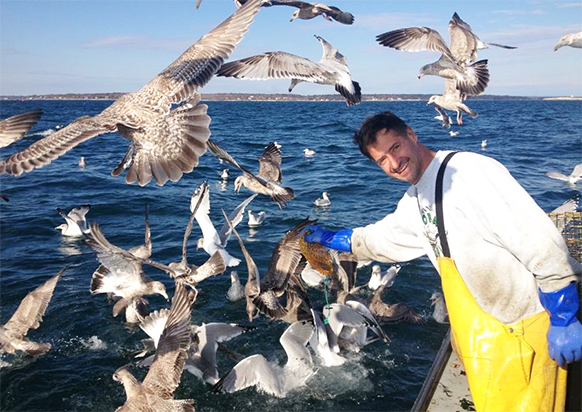 Walking the forests and swimming in seas has made me feel more human than sitting at a lab bench, crunching numbers in spreadsheets. Perhaps this is due to our long history as hunter gatherers. It has only been the last few hundred years that large numbers of humans have earned their keep indoors. About 6 years ago I worked as a sternman on Captain Ernie Lovett’s lobster boat in Casco Bay. It was the hardest work I have ever done and it sculpted (aka beat up) my 40 something body. Being a slave to an age old trade, rising at 4 AM, coming home smelling like dead sometimes rotten fish never bothered me as the spectacular sunrises, porpoise sightings and even a rare blue lobster more than made up for the realities of being a fisherman. Salt water is a corrosive agent, the captain would say, it gets into your brain an rots it. True to these words I have not been able to forget this experience.

My octogenarian neighbor once said to me that life is about learning new things. I began to learn about the sea as a sterman and again while sailing in San Francisco with my ex girlfriend Sarah aboard her beloved Blue Moon. I worry about the boat like a companion and the boat is still a part of my heart. My quest to learn more about living on the seas is far from satisfied. Although I am far from financially secure, I have chose to live rather than be a slave to money. I paid the fee to join a site called crewseekers, made myself a detailed and colorful sailing resume and began conversations with potential captains. A couple of individuals seemed compatible, but Bruce seemed so much like me. Namely, a bit introverted with a love of remote places and a drive to stay busy working with his hands. He invited me to Combermere, Ontario to work together, learn each others idiosyncrasies prior to trying to live in 100 square feet together. I once again feel lucky to have found a mentor who rapidly turned into a friend. Somebody to team with, to put the boat first, to look after each other on sometimes unforgiving seas. Very few people of our times would take the risks but I am confident that my decision is the right one for me. I look forward to sharing what I learn with whoever desires to listen.