If I had to choose the most remarkable individual I have ever met in my life, it would be my octogenarian friend Elaine. I lived near Elaine on the outskirts of Portland Maine.  She was my neighbor for 10 years but it was not until the second half of my time there that we met. Elaine was a very visible member of the community. A couple times a day she would take walks around the neighborhood. She often looked thoughtful while walking. I remember her walking tall with perfect posture. She would wave with an honest smile that would instantly be transferred to those who shared her glance. Her gaze, and even more so the gaze of her husband Francis, was the type that seemed to look inside you and see your soul. As I learned more about this remarkable couple I began to understand how they developed these skills.

I think it was the summer of 09 when I first got to know Elaine and Francis. As I hurried by their home in my car racing somewhere or another, I would glance over and see Elaine watering plants in black plastic pots from the nursery. Her yard was already among the most stunning in the neighborhood with edible plants galore. Her careful caring for these potted plants continued from June, through July, and into August. Perhaps it was providence that inspired me to knock on her door one day and introduce myself as a neighbor and explained that winter was coming and that it was time to get the plants in the ground. As I write this I can’t help but thinking that somehow it was Elaine’s plan all along to get me involved. She suggested I come by Saturday to help her and I agreed.

I have never felt so over-directed in a project in my life. A detailed map existed for the precise location of each plant and there were persistent comments about the appropriate posture while gardening. The critique was kindly delivered in a caring way and to this day is appreciated. She patiently taught me the principles of no till gardening, how to repurpose newspaper as weed barrier and the value of garbage sandwiches. All were valuable permaculture lessons. Elaine quickly became both an inspiration and one of my most influential teachers. At the end of the day we had found new homes in the earth (I can still hear the way she says this word) for around 90 plants. She was building a haven for bees and food for the neighborhood. I remember bee balm, echinacea and strawberries being among the plants added to her already diverse edible landscape that day. She provided a delicious vegetarian meal and when we were done she offered to trade a 10-week yoga class in exchange for my efforts. Yoga has been a life changing part of this interacting and while I neglect my practice, selected exercises enable me to do demanding construction activities like hardwood flooring and roofing and feel perfect the subsequent day.   Elaine’s words follow.

What is your favorite part of living in Maine?
I’ve always felt proud to be a Mainer. In fact, I readily tell people that I was born in 1935, in Springvale, Maine. My parents and I lived at the town square, near Nasson College, and since they were both hairdressers, their “Marie’s Beauty Salon” was frequented by college students.

In the summer, we regularly drove a short distance to Mousam Lake where we would go swimming. Since Springvale is also not very far from Wells Beach, we had our choice of driving to the beach, or to the lake. I would walk along the shoreline enjoying the sound of the waves crashing on the shore while gathering sea shells. But I preferred swimming in the lake, and going for boat rides.

I have fond memories of growing up in that small Springvale town, and I like to recall my experience living there when I went to grade school. Later, I took the bus to the high school in the adjoining town of Sanford. It’s only when I went to college in 1954 that I left Springvale.

When I returned to Maine in 1960 (by the way, as a nun) – I lived in Waterville where I spent a week’s vacation in nearby Manchester, Maine, at Cobbosseeconte Lake. There I relished seeing and was mesmerized listening to the wail of the loons. It was also an added pleasure to be reminded that I had earlier, at Mousam Lake, been in the presence of loons Voices: Common Loon.

After I left the convent in 1970 and then married Francis McGillicuddy in 1972, we settled down in this home in Portland, Maine where I still live. I especially appreciate its location because, living three and a half miles from in town Portland, it offers the advantages of access to city life such as concerts, as well as a countryside atmosphere on this quiet, tree lined street without sidewalks. So I’d say that my favorite part about living in Maine is its bucolic pastoral setting – its rustic tranquility, even around its cities.

I also appreciate the variety in Maine’s landscape. As a coastal state, the northern-most state in New England’s northeast, it borders the Atlantic Ocean. So its terrain includes a jagged, rocky coastline, low, rolling mountains, heavily forested interior; and picturesque waterways, rivers and woods and parks.

Before Francis died in 2010, we did a lot of traveling. We went on tours in Italy (including Rome and Venice) Israel, Ireland, France, and we also spent three weeks in Vietnam. I’m glad and grateful we did that because, it not only gave us a deeper understanding of other cultures – it also helped us to understand that our home in Maine is a unique part of our planet earth.

Do you see changes to the world where you live?

Yes I have seen changes to the world where I live. It’s been warmer. In fact I’ve learned from the EPA that Maine has warmed twice as much as the rest of the contiguous 48 states. There has also been more rain and so, the sea level is rising and the oceans are also becoming more acidic.

It’s been warmer and ticks are active when temperatures are above 45 F,  The transmission of ticks borne diseases like Lyme disease to humans in Maine is becoming common.  There has been more rain (and even if this happened only once that I know of) – some lower lying streets intown Portland like Somerset Street, not far from Back Cove along the Baxter Boulevard, were flooded. And in Scarborough (located to the south of Portland) sea level rise has threatened their salt marshes.

Finally the oceans are becoming more acidic, studies published with University of Maine scientists as lead authors show a fishery in which warming waters off Maine have changed the dynamics of the lobster and shrimp population.  Many Mainers still rely on the ocean for their livelihoods.

I am maintaining the permaculture ecosystem that my late husband Francis and I put in place on our property during a three year period, from September 2006, until the autumn of 2009. As an “edible landscape” its cherry tree and plum tree blossoms and milkweed plants, for example, attract bees (which are endangered). Moreover, the pond in the back yard attracts frogs which in 2018 were reported to be “disappearing.”

Anything else you would like to ask or tell me?

I very much appreciate your own good work in initiating this project of “Climate Change Interviews”. I must add this as well: When Francis and I undertook this permaculture “project” in 2006, you were living in Portland Maine as our neighbor. And, it’s you, Matt Ryle, who helped us select and plant some flowers which are also decidedly a part of “permaculture”.

Working with Elaine on her permaculture project provided inspiration to continue those efforts on the places I have owned and focus on adding visible garden spaces with fruit trees and berries to the people who live there in the future to enjoy.  Many people have coached me that this was a poor use of financial resources but I am convinced it has significantly increased the value of these properties.   However the true value I have obtained from my interactions with Elaine are not measured in dollars but the lessons I learned.

Francis was a Catholic Priest and Elaine a nun during the questionable time of America’s history, the vietnam war.  They found love, true real love that lasted all their days together.  My heart is warm at this very moment and filled with joy as I recall the way they interacted. I watched Fancis one day as he was preparing in a meditative like state for his final transition and I could not possibly know it at the time but this brief moment in my past prepared me for when I helped my own father with his final transition. There are times in life when we all try to understand love as well as death. There can be beauty in both and perhaps this audio story about Elaine can help readers who follow this link gain some understanding of both Sing to me and I will hear you. 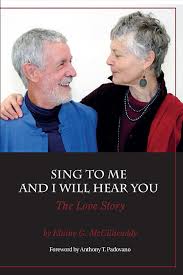 Elaine has now written a number of books about their true love story that can be found here Books by Elaine.  I have not read these books but am feeling compelled to make time for this opportunity.  I am pondering the word providence. I did not know the definition of this word before I met Elaine and it is one of the many new words I am learning as I walk this new path in life. One truism I have certainly experienced from my interactions with Elaine is that by giving you seem to get back much more in return.