Interview conducted remotely aboard the R Heritage Too

The sea is beginning to awaken from its winter slumber in the Azores. As the ocean waters warm, phytoplankton, tiny photosynthetic organisms, bloom and the entire food chain comes out of a state of relative hibernation. These plant-like organisms are fed upon by zooplankton, tiny shrimp like animals. Sea monkeys or brine shrimp are an example of zooplankton that some people may be familiar with. Small fish in turn dine upon these tiny shrimp and are eaten by larger fish, some of which eventually end up on dinner tables around the world. Even the largest mammals, the baleen whales migrate to the Azores this time of year to dine on these tiny animals as part of their long journeys between the poles. I find myself wondering if these intelligent creatures are curious about the lack whale watching boats and other human activity on their annual journey.

The other day the only other sailor sharing the dock in Praia da Vitória and I went out to try and spear some fish for dinner. This activity is a part of the growing bond between the four full time residents of the 3 empty docks here that make up the harbor community. We continue to check-in with the other boater to ensure everybody is healthy and safe. Obtaining food from the ocean eliminates a trip to the grocery store where well spaced lines of people await entry. The density of people in the supermarket is closely monitored. 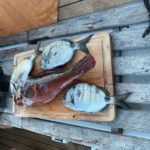 While I am enjoying learning new skills like spearfishing my thoughts often drift to my friends and family at home. One of these individuals is Conan.

I had not seen Conan for almost 20 years and did not know each other well in school. We both excelled in science classes and went on to university. Neither of us enjoyed the constraints of the corporate world. Sitting in an office or lab was just too boring and despite obtaining advanced degrees in the sciences we both ventured into the trades. Creating tangible things brought us both satisfaction and being our own bosses appealed to our independent spirits. I feel there is an important lesson here for adolescents who like to work with their hands. Some much of the wage growth that has occurred in the last 20 years has occurred in the trades. Conan and I have been sharing emails about how life might change due to the crazy new reality the world is currently experiencing. Conan’s words follow.

What is your favorite part of living in Denver?
I like Denver because of the proximity to family and to the mountains. I often work overseas as a wilderness guide or climbing guide.  Denver has a major airport that enables access to the world. I place a high value in being able to spend time in the few wild places left in the world. 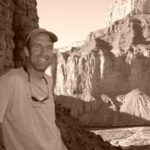 What is your least favorite part of living in Denver?
I hate the traffic. Like so many places in the world, Denver has become crowded with too many people and there has been an influx of people that don’t have traditional Colorado values. Colorado values are being patient, not in a hurry, open, friendly and tidy. Colorado values are not, driving aggressively and throwing trash out the window. There are parts of town that are becoming trashy, there is much more aggressive driving; I feel that this is due in large part to some of the people who have moved here who do not share our values.

Do you see the changes to the world where you live?
The world is much more interconnected and things are moving faster. The growth of our civilization has created a beast. This creature can not be controlled by one country or even a group of countries. I believe that we can have a positive impact by changing locally but it is frustrating that things that occur elsewhere may have a bigger impact that we can offset.

How will this impact your community?
Local communities are much more Impacted by global events. It is becoming increasingly difficult to anticipate how things that go on elsewhere will impact our local lives. Despite our best effort to control and manage local resources, things like climate change and new diseases spreading around the world are causing problems that we must consider and address.

Can you give me an example of something you are doing to improve your community?
My girlfriend and I have decided to grow a garden. I am also a big believer in urban renewal.

Not everybody is able to have the luxury of living in the country, but by creating better urban spaces, the quality of life in neighborhoods increases. I continue to live a traditional Colorado lifestyle as an example to my neighbors. I drive slowly, wave, get to know my neighbors and clean up the area around my house when others litter.

Well, the human population keeps growing. There are very few places on the earth that have fewer people than they did 20 years ago. People seem eager to blame other countries for the current pandemic, but the population burden, global travel and the consumption fueled connectivity is the real reason the pandemic grew so quickly. The virus took advantage of this connectivity to migrate globally in a few weeks when 100 years ago global exposure would have taken years.

I do hear some people argue that this virus may be one of many of mother nature’s checks on humans lack of ability to put in place their own controls. There have been others before. The plague and various flu outbreaks. Humans have largely avoided acting upon these warnings.

It seems most of the discussion about the pandemic in a variety of countries in the world centers around what this country or that country is doing. It also frames these arguments as us versus them, or as some sort of political or economic debate. Perhaps the pandemic should give us some pause and that we should take time to think of our own roles in the pandemic.

The most interesting aspect of maintaining the website has been what I have learned from the people who have contributed. These lessons have encouraged me to reflect upon my lifestyle, and the changes I can make to improve my community. Conan’s comments that people are frustrated that changes elsewhere in the world seem to outweigh the impact that local behaviors can offset gave me pause. This seems to be a common argument as to why we should maintain the status quo.
It is hard for me not to feel that the status quo is how we find ourselves in the changed world of shelter-in-place that we are currently living. I read people’s opinions that this is the first check that nature is making to regain balance, but if we are honest there have been others. The black plague, the spanish flu, Lyme disease, and various coronavirus. I believe that these are all natural creations and that as long as there are more and more people living in close proximity to animals the frequency of these events will increase. Doing nothing at home and placing blame on others seems like a poor strategy to take as a species. History seems to be repeating itself and to try and learn from history seems prudent. One article I found interesting which Conan shared with me is found below.

Life after the Plague

While the death toll from coronavirus seems unlikely to rival that of the plague we are certainly seeing some of the parallels. A recession seems imminent and there are stories of crops rotting in fields. People are also beginning to feel the strain of social isolation. In America it seems to be manifesting in odd armed marches that may be politically motivated but I feel the root of this is much deeper. I understand that work gives people a sense of self worth and respect the desire of folks around the world to get back to work and provide for their families. That has been a part of who we are as humans for eons, but our need for human interaction is much more fundamental than our need to work. “What will be the impact of prolonged social isolation and digital interaction on childhood development?” is a question I am asking myself. An opinion I found interesting is attached below.

The importance of social interaction to the human condition

I am an eternal optimist and think that the glass is always as full as you desire it to be. I look forward to the forthcoming renaissance with hope that as a species we will come together and begin to live healthier lifestyles for ourselves as individuals and for each other as members of the world community.