As we prepare to store the R Heritage Too for the winter, I have taken a bit of a break from my goal of an interview a day to tend to the boat.  Tropical Sebastian was unexpectedly strong in the Port of Praia do Vitória.  We learned later it unexpectedly strengthened to near hurricane force winds which caused a sleepless night of tending lines and fenders.  Today in Oregon and California another unusual weather is impacting the Pacific coast.  Oregon Bomb Cyclone, 2019 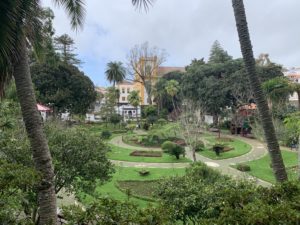 to tour the gardens and museums of Angra do Heroísmo today.  Both are beautiful and worth spending an entire day to see well.  The gardens are stunning and the museum is full of history of the Azores.  There is a bit of something for everyone at the museum.  Artwork, sailing, religious and military history are a few of the exhibits.  We met a very cute couple from Colorado, the state where I spent most of my life.  Their words follow. 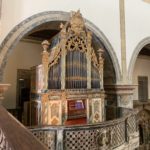 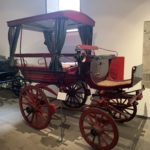 What is your favorite part of living in Denver?
We have lived in Denver for 50 years.  We met each other there which is part of the reason we love the city.  It is an ideal environment, with a lot of sunny days.  We are retired and can’t think of a better place to live.  There are four season, but none are two extreme. It is a liberal minded city and a purple state.  There is good air quality compared to some other cities we have visited.

What is your least favorite part of living in Denver?
We wish it was closer to the ocean and traffic can be impossible at times.   In New York city they have a different ideas about how to get from place to place.   They hop on trains, but in Denver people think about hoping in their car first.  They are working to install better public transportation, the light-rail is improving, but it is still not convenient enough.  Like other car-centric cities the quality of life for people would be much improved by a focus on public transportation infrastructure.  This is especially true for us in retirement.

Do you see the changes in the natural world where you live?
One positive thing we see is that the brown cloud is much better than in was in the 70s and 80s.  This is true even though there are more cars.  We feel this is due to a focus on emissions of cars and power plants.

The last few summers have been very hot.  We read October was the hottest ever.   We have recently noticed the lack of bird songs in the mornings and this caused us to start looking around carefully.  We haven’t seen the English sparrows or house wrens were are used to seeing.  There are a lot of geese in the city.  The city culled 1500 a few months ago and donated the meat to food backs.  Birds are sensitive to changes in the environment and we read that birds populations have decreased 35% in the Northern Hemisphere.

Do you think these changes are from man’s activities?
Yes and we feel the hotter weather will exacerbate the problem.  Hotter days mean more air conditioning, increased power consumption and more carbon dioxide generation.  This also causes people to go outside less which means people will be less in tune with the earth, less likely to hear the lack of bird songs or observed the decreases in populations.  It is likely to impact the Agricultural sector and they may have to adapt how they grow food or the types of crops they grow.

Can you give me an example of something you are doing to reduce your impact on the planet?
We sort or trash and recycle but that is not a solution it is just a single cycle in most cases.  We worry that much of the things we sort into bins ends up not getting recycled because it is not profitable to do so.  We also try to take public transportation when ever possible.

Is there anything you would like to ask or tell me?
One other thing we have noticed is that there are scooters everywhere in Denver.  Electric bikes too.  We understand that it annoys some but we feel it is an overall benefit.

We are really concerned that the US pulled out of the Paris Climate Agreement.  We used to play a leadership role in fighting climate change and now we are no longer leaders.

I really enjoyed talking David and Karen in such a beautiful spot.  Their reflections on both positive and negative changes was somewhat unique among interviews conducted thus far.  Their concern about pulling out of the Paris Climate Agreement were something I read about in the new a few days ago.  Apparently this has been a factor for some Pacific Island nations, important strategically for the USA, to become more closely aligned with China (Pacific Island Nations, Paris Agreement).  The crew of the R Heritage Too may be able to interview peoples of the Pacific islands first hand to understand their concerns.  I look forward to that day.