The Azores are volcanic islands. Black sand beaches and dark porous cliffs are present on many of the islands.  Several islands offer lava tubes to explore, but until today the crew has yet to explore these.  Today captain Bruce, his wife Judy and I explored the two tourist caves on the island.  The underground world is so different than the sea or land, but rivals the beauty of both.   It is a place you can not help but feel you are a part of the earth.  Algar do Carvão was the highlight.  A truly spectacular place where one can walk into the underground center of a dormant volcano.  It is an experience I will not soon forget.  I returned again to my favorite cafe.  Pastelaria Graça where I meter Diogo and his family.  They were kind enough to share some details about why they moved from the mainland to the Azores and offered to become  some of the faces of climate change.  Their story follows. 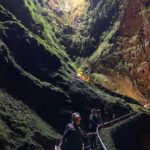 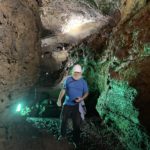 What is your favorite part of living in Praia do Vitória?
It is quite and safe.  We are all family and friends in this town.    We have the luxury to leave our houses unlocked.  It is a very good place to raise a family.  My daughter can go down the street with other kids and play and I do not worry about her.  My wife is from Porto and life brought us back to my home in the Azores.  I do not have to drive far, 2 minutes to get my daughter from school.  On the mainland I drove much longer distances.  We use this extra time to spend together.

What is your least favorite part of living in Praia do Vitória?
It is difficult to leave to visit the mainland and too expensive.  At times it can be too quiet and people can get bored.  As a specific example, movies take a long time to get here.  The movie Joker will not come to Terceira until December 13.  There is also no proper mall.  I understand why this is because it could ruin the smaller businesses.

Do you see the changes in the natural world where you live?
Yes, we feel it.  Now is a great example.  It is almost December and we have had 2 week of summer weather.  The last few years we have only had a month of winter.  Hurricanes are also a concern.  They seem to be visiting the Azores more frequently.

I can also see changes to the tides.  I grew up on São Miguel and we used to go to the beach.  Twenty fives years ago, in Vila do Franco, at low tides there were rocks, but those same rocks are no longer visible when the tide is low.  The beach is almost gone.

How do you think these changes will impact the Azores?
We have large hills here and will be better off than places like the Maldives and the pacific atolls.  They will disappear as the sea rises.  It will not impact the Azores as badly as other places.  We are hardy people and used to storms, earthquakes, and have even survived volcanoes.  I do worry about bigger Hurricanes though.

Whenever I see a piece of garbage I pick it up.  It all starts with small details.  Choosing to live in a place where I can be close to work and my errands is another example of how people like myself can reduce there impact.  I think it is important to tell everybody that together small changes can make a difference.

Is there anything you would like to ask or tell me?
Have you been to Angra?  It is a protected city.  People are not allowed to change the architecture.  I like that we work to retain our heritage.

In Praia the loss of the US airbase was really hard on the city.  There used to be 2000 people from the air force here.   They would bring their families and people would rent their houses out.  The city is still trying to figure out how to adapt to this change.  There were rumors there was going to be a training center and the people in the Azores hope that the Americans come back.

So often you hear in the news that the presence of American armed force members negatively impacts communities.  It was interesting to hear that the people here want them back.  While I am quite enamored by the pace of life that allows people to live by a more natural rhythm, I am beginning to see that the people here struggle to make a living.   The difficulty of earning a living in our modern world is part of what makes the people of the Azores tough.  It is no wonder that the occasional rumbling of the earth, frequent storms and potential for volcanic eruptions do not seem to bother them.