I was exploring the 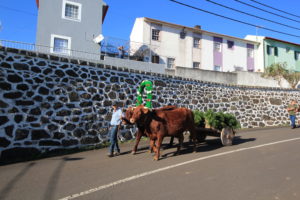 eastern tip of the island of São Jorge when I came across a a parade of working steers towing old wooden wheeled carts.  Some were full of goods from the field otherswith bread.

Kids were also leading livestock down the street.  There was a marching band and they were handing out wine, bread and cheese.  How could you not love such a place.  Elvino could see that I was curious and he called me over.  He explain that a local woman had organized the event to help the young remember their history.  Many of the old men in the streets used these very carts work their field and to move their families from place to  place.   Elvino’s words follow.

What is your favorite part of living in São Jorge?
I lived in the US a few different times, in the San Francisco bay area.  My mother moved me there when I was young.  I like the sea here and the relaxed pace.

What is your least favorite part of living?
Honestly there is nothing that I do not love.

Do you see the changes in the natural world?
The weather has been trippy.  Today it feels like summer.  Our wet season have been dry.  I’ve grown potatoes for many years but recently the leaves seem to be starting to burn.

Yes, I do not throw things on the street.  I am a cigarette smoker but I don’t throw my butts or plastic wrappers and I separate mm garbage.

In general people of the Azores do not seem concerned with the prospect of climate change.  Even though so much of their population lives on low lying Fajãs near the ocean.  A common worry of the Azores people is garbage and plastic pollution.  It is something they can see.

Many people seem to be a cigarette smokers in the Azores.  Young and old alike.  Maybe they are trying to smoke themselves off the planet before the climate changes.  Butts litter the streets.  If a soccer game is on the TV at the cafe and a goal is scored the people smoking just outside the door run in, butts in hand. Smoking indoors is less common, but the place I write this today is full of smokers and my eyes are burning.  A woman in her 20’s just bought a pack from the cigarette machine.   This place is like a trip into the past.  A slower pace of life and way families interact seems before my time and so is the fascination of the general populace with smoking.