A friend of mine named Shon, a Maine lobsterman, once described his experience swimming to ram island ledge after his boat was swamped by a rogue wave.  It sounded like a brutal struggle.  Since hearing this story I felt it would be prudent to obtain some sort of formal training on how to swim ashore in case I was ever unlucky at sea.  Two of the faces of climate change, Arnaud and Basia told me about Coasteering.  Coasteering combines ocean swimming, scrambling and and climbing from place to place along a sea coast.  They had recently experienced coasteering with Emanuel of Rope Adventures.  This was exactly the learning opportunity I had been looking for so I signed up for coasteering on Emanuel’s easy to use website, Rope Adventures.

The coasteering skill set is originally thought to have developed from people foraging for limpets or other coastal food sources.  It evolved into a guided recreational activity along the rocky coasts of Wales.   My day of coasteering began at with an itroduction to the techniques and some basic safety talks.  A thick wetsuit, a helmet, climbing shoes designed for the sea, and a flotation device were provided.  The technique to exit the water was called Jesus walking and I am writing this blog post on Jesus street.  The Catholic influence is strong in the Azores.   The basic gist of how to exit the ocean is that you keep your feet towards the rocks, try and time it so the surge is not too huge and let the sea raise to to your feet.  Jesus walking.

Emanuel was a great guide, gave clear and consistent advice.   He demonstrated the techniques first, then found a safe place to coach me as I tried.  He always stood ready with a throw bag in the event things went awry.  On our way back, he began to pick up plastic litter along the beautiful rocky shoreline.  We began talking of the earth and his words follow.

What is your favorite part of living on Terceira Island?
It is quite peaceful and we have time to do everything.   For example, we can go for a swim in the morning, work, rest a bit and then time left over for dinner with friends.   In the big cities on the mainland breakfast, work, dinner, sleep is more common.

What is your least favorite part of living in Terceira Island?
Making a living here is more of a challenge.  Most people know each other and there is a lot of small town gossip.

Do you see the changes in the natural world where you live?
Definitely.  There used to be a lot more fish.  The Chinese ships fish just outside our economic zones and use long lines and drag.  It has had a dramatic impact on the amount that subsistence fisherman catch.

We used to have winters with lots of rain.  Enough to have water all year round.  All of our drinkable water comes from rainfall.  Recently the winter rains have not been consistent and the springs are low so we must ration water.   I also see in Praia bay that the sea level is higher.  This also impacts the salinity of water in the springs near the ocean.

How will this impact your community?
Over the last couple summers, two or three times a week there has been no water to drink in many towns.  The dry times are also very hard on farmers.  Sea level rise may also impact our homes in our coastal towns.

Everyday that I go out I pick up trash, plastic mostly.   I was just here last week and filled a very large bag.  Already in a week there is this 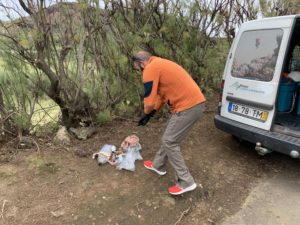 .  I pass along the message of how important it is to keep the Azores clean to friends, family and customers.  I’ve been cleaning the canyons and streams on this island since 2011.  Twice a year we organize a cleanup and remove huge amounts, big trucks full of trash.   Americans from the base and customers join in.  City hall also organizes an annual coastal clean-up.  The farmers and fisherman are the worst trash tossers.

My girlfriend and I also made all the shelves in the Rope Adventure office from reclaimed wood and the couch in our home we built from pallets.   We did buy a nice piece of foam and some material to cover it.  It looks great and is very comfortable.  It was much better than spending a 1000 euros on something from China.

We also set up a budget around Christmas time so that we don’t buy needless things.  This time of year is about being close to family and friends.  The gifts we buy must be local.  We try to focus our spending on the local economy.

Emanuel asked me what I was doing to minimize my impact?  I used to grow much of my on food when I wasn’t on a boat but now I am minimizing consumption and buying local, I answered.

Emanuel then went on to described how he started his business.  I had an office job but the company closed.  For two months I had a lot of time to explore the island.  I loved exploring the canyons and rock climbing.  I started taking my friends out and they called to go again.  I had 3 helmets, 3 harnesses, 2 sets of shoes and 4 euros.  Friends started to tell their friends and I saw a business opportunity.  I had to charge my friends at first, which bothered me, but I was able to grow organically without a loan.  It was a struggle at first but now I sleep better.  I have met and made friends with people from all over the world.  Money doesn’t make you sleep better it is how you have touched others.

I have met quite a few happy entrepreneurs in the Azores.  People who have once had cooperate jobs that provided stable incomes but the redundancy of desk work was soul crushing.   They followed their heart and found other opportunities by walking a different path.  A common theme is that they have decided to get by with less and seem to be rewarded with the inner peace.

People have asked how do I afford a life at sea.  Saying no to stuff and yes to trades.  I not longer have a comfortable income, shop at second hand stores and think hard about purchases.  A big part of the answer is that I decided not to want as much.  A five dollar beer is now way out of the budget.   My rate of consumption has been declining for year but this experience has forced a more dramatic minimization, yet my life has never felt so full.