In the past work has taken me over seas for up to a month at a time, but it has been almost 8 week in a country that speak a language that is not my native tongue.  When I find a cafe that I enjoy, I tend to return to the same spot night after night to work on this blog and after 3 or 4 nights the locals become curious.  Many only speak Portuguese and the owner of Pastelaria Graça has set the expectation that I ask for my nightly sweet in Portuguese.  She runs a clean well organized place.  Last night she brought in a black box and stated something in Portuguese which I did not comprehend. 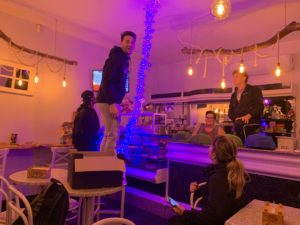 The local patrons sprang into action and began to decorate the place with Christmas decorations.  It became clear that the goal was that everybody who visited the establishment contributed to the family atmosphere Graça was striving to create.

This morning we toured some of the forts and museums in Agra do Heroísmo.  The church in museum contains the remains of Paulo da Gama, brother of the Portuguese explorer Vasco da Gama.  The people of Portugal are proud of their history and the museum in Angra does an excellent job of educating visitors on the history of the Azores.  After the museums we stopped for tea in the harbor and met Jennifer and Davorka, two individuals who proudly hailed from St. Louis.  Their words follow.

What is your favorite part of living in St Louis?
Saint Louis is a small city but is feels like a big neighborhood.  It is easy to get around, a well planned city with a lot of diversity.  There are large Bosnian and Vietnamese communities.  We are an inclusive city and provide abundant resources to help our grow our immigrant communities.  We have amazing food, interesting architecture, and a great botanical garden.  There is also Forest park.  If you ever go to St. Louis you must visit the park.  It is one of the largest urban parks in the US and is bigger than central park.   There is a low cost of living, easy access to social circles and of course the arch, “The gateway to the the west”.  Despite being a small city there is an abundance of culture.

What is your least favorite part of living in St Louis?
Some neighborhoods remain segregated and we are finding it difficult to break the education/poverty cycle.  Old stereotypes still remain and we are not proud of what happened in Ferguson.  There are a lot of smart single women in St. Louis which from our perspective is not good.  There also seems to be a lack of men who want to commit to a meaningful long term relationship.

Do you see the changes in the natural world where you live?
There seems to be a tremendous amount of change.  We have noticed more frequent flooding in the spring.  This is especially apparent in the chain of rocks area.  The weather also seems to change rapidly.  One morning you will be wearing shorts and then there are powerful snow storms in the afternoon.

Davorka mentioned that have also been some serious floods recently in her home in Montenegro.  The area hadn’t flooded in recent memory but the water levels were over the houses.  We also had a freeze for the first time that my parents can remember in their home by the sea.  My brother keeps bees and between the two weather events all the bees died.  The beaches are also getting smaller.

Do you think these changes are from man’s activities?
It is difficult to know.  The earth moves in cycles and we may be experiencing part of a normal warming cycle.  The recent changes seem quite rapid.

We have been eliminating our use of single use plastics like styrofoam, plastic grocery bags and straws.  We are also trying to be paperless. Paper plates and things like that are a waste and unnecessary.  We worry about the impact of pesticides and because of this we try to find organic food.  Local organic food is especially important, even though it is more expensive, but it is hard to find at times.  We really like using glass jars and bringing my own lunch from home.  This really reduces the amount of packaging we dispose of.

Is there anything you would like to ask or tell me?
Are you familiar with the chain of rocks?  As a person who likes boats you might find it interesting to read about.  It is a historic navigational hazard on the Mississippi and now the bridge there is a beautiful place to walk and ride your bike.

What is you goal with this?  We think one key is to create awareness.  In Montenegro nobody really ever thought about climate change until the flood and the freeze.  After seeing these changes people began to talk about it and are becoming aware.

Saint Louis definitely seems like a place I would like to visit.  What single guy who likes intelligent woman would not desire to move to a place with a reported abundance.  This seems like import data that should be shared.  Forest Park and the chain of rocks bridge area certainly sound beautiful.  Rarely have two people spoken so passionately about their home.  I was delighted at how well informed Davorka was about American history.  The value of immigration to American communities seems to be a topic of some debate and I was delighted to be educated about American history by a individual from another country.