The church in Praia do Vitòria is the second oldest on the island of Terceira.  It was built in 1456 prior to the first European settlements in America.  It has been destroyed by earthquakes twice, once in 1851 and again in 1980.   One of the towers and the main altar survived the 1980 earthquake. 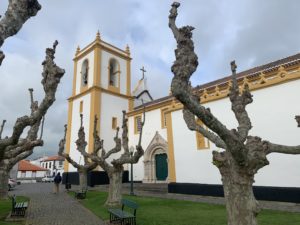 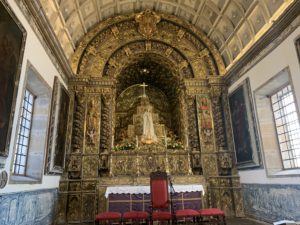 As my current stay in the Azores approaches an end, I contemplate what people have taught me.  In general, the everyday working class Azorean does not think about climate change.  They experience hurricanes but do not fret about them and many have lived through large earthquakes.  I am beginning to feel thatworrying about climate change is a luxury of living in a well developed country.   Three out of four of my last interviews had no concerns about changing weather.  Ludrego is one of them.  As more tourist visit the Azores they are providing opportunities to learn the history of these islands.  A year ago the church of Matrix de Santa Cruz opened for visitors and Ludrego is the tour guide.  The views of the town of Praia de Vitória and the surrounding landscape from the tower that survived the 1980 earthquake make the tour worth while.  An ornate foot-powered organ from 1793 is also quite interesting.

I recommend the tour, if for no other reason than to interact with a down to earth Azorean. Ludrego was happy to share his story.His words follow.

What is your favorite part of living in Praia do Vitória?
This is my island.  I have lived here my whole life and it is what I know.  It is a clam place, very green and everybody knows each other.

What is your least favorite part of living in Praia do Vitória?
I like everything about here.  There are no wars or big problems.  We have earthquakes but those do not happen very often.

Do you see the changes in the natural world where you live?
No, I do not really notice these things.

Is there anything you would like to ask or tell me?
One thing that is hard about living here is watching the young people go away.  They go to college on the mainland and many do not come back.  Our big industry was the US Air Force base.  When they reduced the numbers it was hard for young people to find jobs.

If you were here last year you would not have been able to tour this church.  More tourists have been coming to the island each year so they hired me to give this tour.   We hope that tourism will replace the base as our primary industry.

I would have anticipated a large percentage of the population of the Azores would have been concerned with the increasing frequency of hurricanes are impacting these island.  Instead, very few Azorean people seem concerned about climate change.  The economic realities of living on isolated island is often their primary worry.  Many see to fret about the number of young people that move away.

Interviewing and asking questions in a manner which yields honest answers is unexpectedly difficult.  I do have a bias and it is likely not surprising to frequent readers that I feel that our changing climate will provide challenges to communities.   All interviews are interesting to me because they provide the prospective of a community member at a give moment in time.   Perhaps someday others will desire to collect peoples stories while sharing the history and pictures of the places they visit.  I just hope that if this occurs they will celebrate the perspective of the all individuals who are willing to be one of the faces of climate change.