Today is my last day in on stunning São Jorge.   I will miss the friendly people here, the tiny port of Velas and the views from the steep cliffs around the island.  One of my first interview here was with a young man named Manuel who hoped to be a scientist.  He said that I must visit Poça dos Frades, the town’s local swimming hole.  Today I finally made it.

After swimming there I stopped in to the Restaraunte São Jorge for a tea.  There I met Mario.  Like many people from the Azores he moved to North America and returned for the slow place of life and the inner-peace the island offers those who return.  Mario’s words follow.

What is your favorite part of living in São Jorge?
Nature is my favorite part.  Most of all the Atlantic ocean.  I like spear fishing for fresh food.   I like to eat parrot fish and they are abundant in these waters.  I also like to scuba and snorkel.

What is your least favorite part of living in São Jorge?
Tropical storms.  I was born here but lived the first 16 years of my life in California where I became used to mild weather.  I have never quite got used to the strong winds of summer and winter.

The minimum wage is also quite low, lower than most places in Europe.  This causes many young people leave the Azores for opportunities elsewhere.

Do you see the changes in the natural world where you live?
I have lived here for 15 years.  I have seen more more modern technology coming to the island.   Development is occurring a steady pace.  I am a musician and it used to take a couple years for new music to arrive to the island, now the delay is much less.  It is good for the Azores and improving the quality of life of people here.

I see a lot of plastics in the waters.  It is a small island and we must recycle and there are bins all around the island to enable these efforts.

Is there anything you would like to ask or tell me?
I have lived in California a few times and I am a graphic designer there.  Have you hear about the legend of Saint Jorge?  He was said to have slayed a dragon and I made this graphic to celebrate our island. 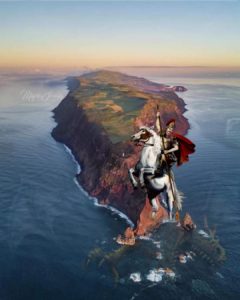 I live on the north end of the island, the part for shown in the graphic.  When I am here my mind is in Cali and when I was there my heart is here.  So many young people live here for the go go go of the modern world, here the clock doesn’t move.  If I won the lottery I would invest in something to help keep young people here.

Mario is the first person I had met that talked about missing aspects of the go go go world of North America.  I realize that I am interacting with the subset of the people who chose to move back.  The fisherman Ricardo stated about half the people from the Azores leave and live abroad.  I would enjoy hearing from people from the Azores who decided not to come back.   Mario also shared the graphic he developed for the Restaraunte São Jo 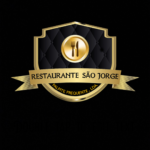 rge.  Many people seem to have some sort of side business.  In the summer Mario plays music on the stunning cobblestone streets  of Velas 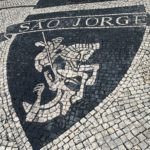 .  They are the most intricate I have seen in my time thus far in the Azores and make this charming port city worth spending time in.