Yesterday I was invited to play Marralhinha by the regulars at Pastelaria Graça.  The rules of the game were strait forward.  Rolling a one or 6 allows you to get a marble in play.  Every time a 6 is rolled you roll again.  Landing your most advanced marble on an opponents sends them back home.  You play with a partner opposite the table and the object is for your both to get all 5 marbles around the board.  If one partner finishes they help the other by using their rolls to advance their partners marble.  This part seems Azorean.  I’ve seen groups of farmers helping each other moves cows from place to place helping each other to succeed.  It is not hard to feel the sense of community here and after only a few weeks the people are inviting me to be a part of it.

The people of the Azores take pride in each other and also in their boats.  A few days ago we visited the fishing village of São Mateus da Calheta.  Many of the smaller fishing boats had been removed from the water and freshly painted for winter storage. 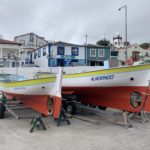 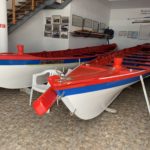 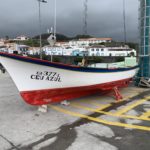 Seeing these well cared for boats was a reminder of the work required for to store the R Heritage Too for the season.  Replacing some failing stainless screws, storing the sails and self bagging system and sanding and varnishing some teak were on the to-do list.  Unexpectedly the transformer 250 V to 125 V transformer failed and then the engine wouldn’t start.  It was a much better day to be crew than to be a boat owner.  Even with the wheel house covered with solar and a nice sunny day the R heritiage too only generates enough to sustain the itself.  Power tools were out of the question.

Visiting this side of the island enabled us to purchase some of the parts we required and both were fairly simple repairs.  We had to purchase and wire a new transformer and fix a corroded elbow on the fuel tank.  A local shop fabricated the threaded elbow for $20 euros, the bargain of the trip so far and the new piece should be much higher quality than the original.

One of the other sailors in the marina is named Patrick.  He and his wife Ensa have lived in the Marina in Praia for 7 years and is a wealth of information. From the location of free places for forage (fresh spices and citrus trees) to the cheapest part stores, Patrick has learned all the tricks tricks.  Both he and his wife Ensa decided to call this port their final destination after being caught in a very bad storm that lasted for three days.  Patrick now makes intricate ships in bottles and they day sail in the summer.  Both of them described the horrors of the storm and the joy at which they celebrated safely arriving in port.  The couple recently rescued a puppy from the engine compartment of an abandoned after loosing their last a dog a few weeks ago.  Patrick was happy to share many stories for this website.  His words follow

What is your favorite part of living in Terceira?
We chose Terceira because after sailing together for 15 years we decided we had seen enough.  We experienced a very bad storm.  I (Ensa) was too scared to help Patrick so he had to sail himself for 3 days.  This was OK when I (Patrick) was younger but it was very hard on me.  We also like the Azores.  They are welcoming to visitors and the authorities do not hassle you.

What is your least favorite part of living in Terceira?
We really love everything about this place but the military aircraft flying overhead can get loud sometimes.

Do you see the changes in the natural world where you live?
There have been enormous changes over the last 3 years.  We have had several very big storms and they seem to be getting worse each year.  The winds are sometimes so bad that we can’t even walk on the docks.   It is not just here though it is happening all over the world.  This is one reason we stopped sailing.  Strong storms seemed to be forming out of nowhere, even when weather prediction applications predicted fair winds.

We live on this boat which generates some of its own power and we do not own a car.  We are looking for a house, one with a place to garden and grow our own food.  In the meantime we have found a number of places we can walk to and harvest free food and spices.  We also sort our garbage and recycle.  We also rescued this puppy.  She has very much made our little world on this boat a better place.

Is there anything you would like to ask or tell me?
We have had many interesting experiences in our lives.  I (Ensa) lived in a cloister and didn’t talk to anybody for 6 months.  Everybody should do something like this as you learn a lot about who you really are.  I also used to teach horseback riding to the handicapped, lived in a yurt and am now studying to be an herbalist.  Patrick has written four books.  It takes him 200 hours to make the ships in the bottle he showed you and he spent 5 years in Madagascar while in the French foreign legion where he was a photographer.

We sailed many places together but we really loved Morocco.  The markets there are fabulous.  The dried fruit is incredible and we used to buy 100 kilos or dried food at a time and fill the stores.  When we were there 7 years ago, a dinner, salad and tea were 1 euro.  Would you like to buy our boat Ensa asked?  We can sign a contract right now.  Ask Patrick how much he wants for it.

Their ketch is a beautiful craft and I am enjoying looking at all sorts of boats as I contemplate if I want to obtain a craft of my own and live a life on the sea.  I have been thinking for a while a tiny off grid solar house in the woods somewhere might suit me.  A sailboat seems a bit like an off-grid tiny home that has the freedom of moving to different places.  However, watching the captain open his wallet again and again to keep his 40 year old boat up to date is a good dose of reality.  Hearing Patrick and Ensa’s storm story was also worth contemplating.  Life at sea is not all glamorous but so far the people I have met that are doing it seem to be enjoying a simple high quality life.