It is about 70 nautical miles from São Jorge to Terceria.  This time of year that is about the amount of daylight we have if we can make 7 knots.  Westerly winds from 15-20 knots were predicted, perfect for a nice sail.    A Google Maps screen capture with our approximate route is shown.  I’ve been heavily reliant on Google for the maps on this website as well as Google Drive for the folks on land who are helping me with the website.  While I am touting Google, I also should share how happy I am with their phone service Google Fi.  It is about 70% of the cost of my phone service at home and the call and internet quality has exceeded my expectations travelling the Azores.  I had internet access this entire sail.  I researched cell and internet providers carefully before switching.  Set up was easy and it really seems like the best option for long term travelers from the states to a wide variety of locations. 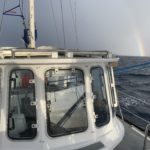 Light rain gave way to sunshine and we ere gifted with numerous rainbows as we sailed the southern coast of São Jorge Island.  At times the wind died down and we had to turn on the engine to make it into the port by dusk.  We were entering at low tide and the charts suggested entry into the port might be a challenge for a boat as big as the R Heritage Too.

Terceira is the second most populated island in the Azores and it was clear from tehd density of housing visible from the shoreline that it was going to be much different than the quiet retreats of Pico and São Jorge.

I am excited to see the city of Angra do Heroismo and contact one of the first people I interviewed.  Miguel lives on this island and has offered to give the crew a tour of the island.  Our port of call is Praia do Vitória.  It is a bustling little town where people were ice skating in the square a wind mills generate a portion of the power for the island.   There will be chores before the tour begins.  We must move the R Heritage Too to a location where we can take a break and visit family for the holidays while the stormy winter seas of north Atlantic calm.  For now I will continue to enjoy the rest of my tea and Portuguese sweets and look forward to sharing some highlights of the island as well as peoples stories. 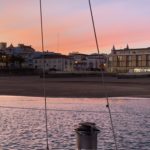 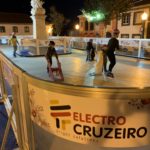 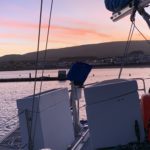