Although we were thoroughly enjoying our time on São Miguel, the weather in the Azores this time of year is tends towards to windy side so we decided to take advantage of favorable winds to sail from São Miguel to the island of Pico. The journey began at about 1500 hours and upon leaving the safety of the harbor swells of about 5 meters were consistently present, blown up from several days of winds from the south. Captain Bruce still moves like a kid on the fore deck and hoisted the main while I kept the R Heritage Too into the wind. Wind predictions were 8-10 with gusts to 15 out of the east. Perfect for our transit to Pico so we let out the smaller working jib and were quickly making 5-7 knots towards Pico. At 120 nautical miles away, we should arrive sometime in the the next afternoon.

I enjoyed a few hours on deck before attempting to rest at 1800 hours. Judy, the captains wife had watch from 1800-2200, me from 2200 to 0200, and the captain from 0200 to 0600 hours. I thought my time as a sternman in Portland Maine and on Sarah’s sailboat in San Francisco had prepared me for unpredictable seas, but the open waters in the middle of the Atlantic were more than I expected. Throughout the night I thrown from one spot to the next in my berth in the bow of the R Heritage Too. Sometime around 2000 the first squall hit. Winds in excess of 30 knots forced captain Bruce to run downwind towards Terceria and the jib was luffing badly. Over time it would shred the sail. From my berth it sounded like a group of children jumping on the deck above my head. I quickly through on some pants and raced to the cockpit. With our combined strength we were able to roll in the working jib but not without issues. One of the working jib sheets had become tangled on the dingy so Captain Bruce again demonstrated he monkey-like sea legs and navigated a lurching deck to remove the snag. In 20 minutes or so the winds began to recede and we could resume our course toward Pico. We learned a few days later that hurricane Pablo had unexpectedly formed and we experienced part of this strengthening.

I was unable to sleep during Judy’s watch, which Bruce took over as the rough seas were not agreeing with here. I heard her experience seasickness a number of times during the evening. The seas were rough and when I was trying to put on rain-gear the vessel lurched and my head bounced of the dresser in my cabin. I like most types of music but my headbanging days are over and I quickly learned the value of bracing both feet against opposite sides of wherever I stood.

I relived the captain at 2200 and he reported a second squall had blown in. I had suspected as much as the howl of the winds are as apparent as the sounds of waves beating against the hull. The sail was fairly uneventful for the first three hours. Lightning could be seen far away to the south and north as first the lights and then the periodic flashing of the lighthouse on São Miguel disappeared into the darkness of night. Throughout this part of my watch winds steadily increased to 15-20 knots and I let out the main when gusts to 20 knots became more frequent. When the winds began to gust to 25 knots around 0130 I decided it was time to wake the captain. The R Heritage Too seemed to be handling the winds well but I am unfamiliar with her capabilities and did not want to risk damaging anything on my first watch.

About 0200 I returned to my cabin for the second time. My preferred method of sleeping on my side was not an option but by wedging myself between a backpack and some pillows and sleeping on my back I was able to doze off for a few hours. I knew as I drifted off that Captein Bruce would be tired after covering Judy’s watch. At 0600 I was manning the cockpit again.  As the sun rose around 0800 I saw my first birds, a sure sign that land was not far off.  I began to scan the horizon for whales and dolphins. None on this leg but I am optimistic we will see some in the Azores. The clear waters surrounding these islands are rich with marine life. Around 0900 the clouds ceiling began to rise and I shouted “Land Ho” as the edge of the massive mount Pico was barely visible in the clouds.

The remainder of the voyage was a bit rough but delightful. We followed steep cliff along the coastline to a small peninsula on the southern coast of the island. The tiny port of into the tiny port of Lajes do Pico is tucked in just on the western side of a dark finger of volcanic rock used for seabirds as a rookery. We dropped the main and motored into Lajes do Pico, reminding ourselves that “Red, Right, Return” is not the case in Europe. Red navigational buoys are on the opposite side here. We compared the functionality of charts of the iPad Navionics App and the captains chart plotter. Both seem equally accurate I prepared fenders and dock lines as captain yelled out sounding every minute. Nobody was available by radio or phone to let us know which slip to take. There were only 2 options in the tiny port and only 6 for vessels of 30 feet or more. It seems clear that not too many cruisers visit this port. 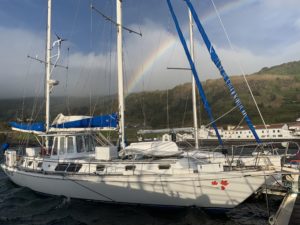 Judy was a huge help getting the boat safely moored. The boat was a bit too big for the dock but with some extra lines she should ride out most any storm predicted in the next several days. Bruce and I spent some time over tea reflecting on the voyage. Discussing things that we could have done differently after the fact is a much better approach than debating when action is needed. I look forward to our next time at sea but for now it is time to explore the Azorean paradise called Pico.